This page lists some of the activities the Society has been involved in in recent years.

FCCS hosts a quiz night in January. The first one in January 2014 was in partnership with our friends at the Fleet Pond Society, and events have proven to be very popular with events selling out very quickly. 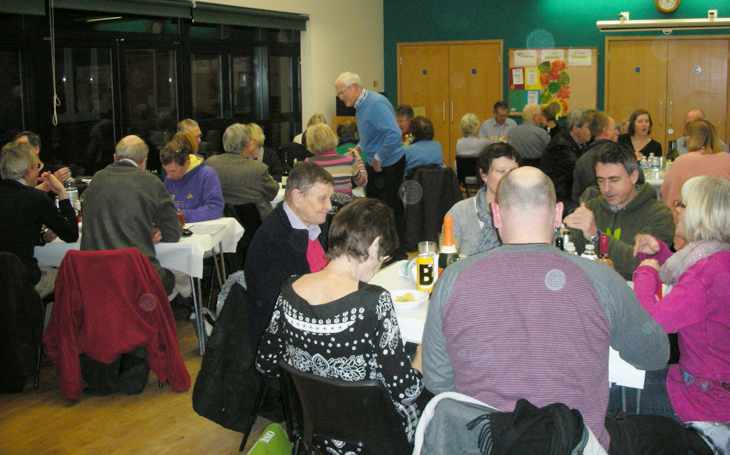 Twelve teams battled through rounds on topics such as ‘Fleet & around’ and ‘People of Hampshire’ and a picture round of ‘Things found around Fleet Pond’.

The fish & chip supper proves popular, and the events, whilst not designed specifically as a fundraiser, provides a welcome contribution to annual running costs.

To mark the national Civic Day promoted by The Civic Trust, the FCCS has organised and runs working parties across locations in Fleet and Church Crookham to encourage civic pride and to improve local amenity. These have included painting benches and 50ft of fence, restoring a noticeboard, replacing handrails on a footbridge, putting up a dozen bird boxes, removing 16 large bags of brambles and weeds, collecting 15 bags of litter. The events have been well supported by the community and have attracted press coverage and national recognition from the Civic Trust movement.

We had had our best turnout at Azalea Park, where residents took to the Park and nearby Peter Driver Sports Ground and Humphrey Park with litter pickers. We were also joined by MP James Arbuthnot who worked alongside volunteers to remove brambles encroaching into the children’s playground. We also repaired a patch of wire fence, cleaned some signs in the park, and painted 50 feet of boundary fence and a bench in the playground.

In the afternoon we moved location to Oakley Park and Elvetham Heath. Tasks in Oakley Park centred on removal of ground elder and painting benches. We also replaced guardrails on a bridge at an entrance to the park.

Over in Elvetham Heath, a small group of volunteers tackled rusty benches and litter bins in The Key. There is plenty more to keep us busy at Elvetham Heath and the challenge will be to recruit sufficient volunteers. 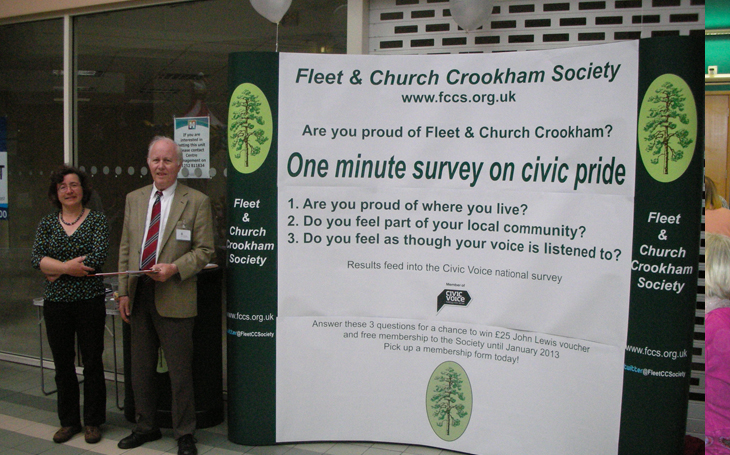 Alongside the display, we captured the views of 230 shoppers in part of a national survey aimed at capturing the civic state of the nation. The survey showed that 92% of Fleet shoppers are proud of where they live and 78% feel part of their community. In a challenge for local decision makers, only 33% felt that their voice was listened to.

The Fleet & Church Crookham Society teamed up with the Farnborough Society and Yateley Society to run a series of seminars in planning and development for members of the public interested in knowing more about the complexities & ever changing planning process.

The third seminar was written & presented by the Fleet & Church Crookham Society.

For several years the FCCS has run early winter bulb planning events to bring Spring colour to public areas and gateway entrances into the towns. The Society has planted well over 10,000 bulbs in various locations that look wonderful in Spring. Working with the local ‘Friends’ groups in five parks (Ancells Farm, Oakley Park, Basingbourne Park, Calthorpe Park and Azalea Park) plus the Cubs and Beavers groups, their leaders and mums and dads, volunteers have dug in iris, daffodil, tulip, English bluebell and snowdrop bulbs. We have been thrilled with the turnout at each event, and the opportunities for the Society to meet like-minded people and work together to improve the parks. It was especially nice to be able to support the new ‘Friends’ groups – for Calthorpe, Basingbourne and Azalea Parks these were their first events and an opportunity for their members to meet each other outside of formal meetings. We were also pleased with the press cover.

The towns and villages of England are being blighted by superfluous signs, haphazard paving and obstructed footways. As a result our streets are losing their local distinctiveness and character. English Heritage are promoting a Save Our Streets campaign to return England’s streets to places where people want to be, where all street users are accommodated and where communities thrive as a result. FCCS committee members Gillian Wain and Stuart Bates have conducted a review of Fleet Town Centre and have published the following report:

Since its inception in 2004, the Town Healthcheck is possibly the most wide ranging and important survey of the needs of the community of Fleet and Church Crookham. The healthcheck report defines the wishes of the community and it is hoped that its findings should shape the future planning policy of the district. Our grateful thanks to the many that have contributed to its compilation and particularly Andrew Macallan for guiding this project from the start.