There are inevitably several factors to consider. Fleet & Church Crookham has a unique special character of leafy openness inset with several areas of natural areas for conservation. Planning applications generally seek to intensify the use of a site in one form or another and this intensification provides potential for the erosion of this character. The Society is very mindful to limit the rate of change and thus it attempts to preserve this character. It is no surprise therefore that adverse effects on existing character and impact on ‘street scene’ feature frequently in our letters of objection. Often small changes to architecture and landscape screening can have a huge effect on how well a proposal fits in with the character of the area. Choice of materials or hedging in place of a brick wall can make a large difference to how an application is perceived. Often, a nearby development can have a huge impact on the amenity of existing residents. The larger high density developments are often of three storey height and can have a major impact on the amenity of neighbouring properties, whether caused by overlooking, noise or light pollution. The Society will generally consider the nearby residents when deciding on an application’s suitability.

Past, current and planned development is also providing an increasing burden on the infrastructure. This manifests itself in many ways. One of the most obvious is the increase in traffic but there are many other burdens such as limitations of drainage, school places, public transport, GP waiting lists, civic services, policing etc. Often the impact is difficult to measure on an individual basis, but in combination with other development in the area, can create a real threat to our natural resources, such as conservation areas, and other areas of wildlife and natural beauty.

Whilst many objections involve resistance to physical development, the Society takes a more substantive view, and will also raise objections to applications likely to have detrimental impact on matters such as the viability of the town centre and increased risk of anti-social behaviour. The most obvious examples will be the loss of retail spaces in the town centre to make way for late night food or alcohol outlets.

Images from our changing towns

“Beauty is in the eye of the beholder” applies to many aspects of our appreciation of man-made things. Paintings, sculpture, cars, clothing and, in this case, architecture.

The examples taken from Fleet and Church Crookham of architecture, which appeals, revolts or saddens are the choice of one or more members of the Fleet & Church Crookham Society Committee, they do not represent the views of the Committee as a whole or of the Society.

The architectural value of a building and, in particular, how it fits into the surroundings is often ignored when new buildings are erected or old ones demolished. When we walk down the busy thoroughfare of Fleet Road, we are too occupied with dodging the rush of people around us or too distracted by the multi-coloured shop fronts to look at the buildings themselves. Stand still outside the eastern entrance to the Hart Shopping Centre and look up at the buildings opposite. Have you noticed the attractive frontage above the building that now houses the Woolwich through to Grants? Have you noticed the balcony on the building above Santander Bank? These are reminders of how much of Fleet Road once looked.

We would like visitors to our website to submit their opinions of the examples shown here and would welcome other proposals for addition to the picture gallery under one of the four headings. Your opinion might help us gain an idea of how local people see their home town and how they would like it to look to future generations. Please contact with your comments/photo contributions. 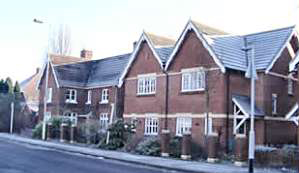 The Good: The estate built on the Albert Street School site. An excellent example of how increased density can be achieved with quality. The architect has captured the character of the Victorian School which previously occupied the site. Note how the new buildings (on the right) are virtually indistinguishable from the Victorian building (left of centre). 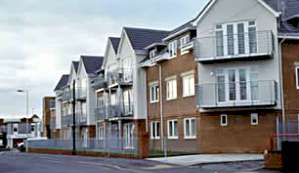 The Bad: The flatted development on the Rose Farm Dairy site. Raw metal additions that give the impression that, rather than remove the scaffolding, it was used to make balconies and railings. The “landscaping” to the road frontage, which is a minimal strip of grass and two or three trees. 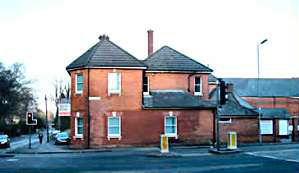 The Sad: The use of unmatched brickwork when re-facing the offices on Pearson’s Corner. Ugly “patching” with poor quality brickwork on a gateway building on the corner of Kings Road and Fleet Road. This is a good example of how to spoil a building by poor workmanship and failing to take a little trouble to find matching materials.

Mismatched brickwork at the corner of Fleet Road & Kings Road 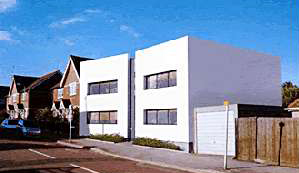 The Mad: (No, we haven’t made this up for editorial value!) – This is a photograph representation submitted as part of a real planning application to Hart Council in April 2004. This picture was created by the applicant in support of his proposals for a residential re-development in Church Road. The application was mysteriously withdrawn shortly after submission in April 2004, leading the committee to wonder whether it was in fact an April Fool’s joke. Rest assured, the society raised objections just in case the application was for real!

Developer’s impression of how Fleet should look in the future?