In January, the Society was alerted to an application by Landmarc, on behalf of the Secretary of State for Defence, to demolish the historic character buildings of Home Farm, Minley.

Landmarc is the organisation that manages military training grounds in the UK, and for the purpose of this article is what the general public might refer to as the Ministry of Defence (MOD)

Home Farm was constructed in 1899/1900 by the owners of the splendid Minley Manor which is now a Grade II listed building and situated a few hundred meters north west of the farm. Whilst a small wooded copse now obscures the view of the farm from the front lawn of the Manor House, the farm building was clearly orientated and positioned to complement the main manor house with a dominant façade built in matching red brick with contrasting dark diamond pattern diaper brickwork which replicates the brickwork pattern on the main Manor House building.

The main Manor House was built in 1860 for Raikes Currie (1801-1884), a wealthy London banker who was also the MP for Northampton to a design by Henry Clutton (1819-1893) inspired by Chateau De Blois in central France.

Now in private ownership, the lodge, the water tower and the Summer house are all Grade II listed buildings. Unfortunately, Home Farm is the only one of these buildings still owned by the MOD and not benefitting from Grade II listing protection.  The Society has seen correspondence from Jeremy Quin MP,  Minister of State for Defence Procurement showing little appetite for any outcome other than redeveloping the site to provide a troop shelter.

Ownership of the entire estate (c2500 acres) was sold to the War Department in 1936 by the fourth generation descendant Bertram Francis Currie, though the Fleet Lodge and the Minley Manor house and grounds have subsequently returned to private ownership. Home Farm has remained in MOD ownership since 1936 and was let out as a farm and latterly stables though to the mid 1990’s. Very regrettably, the MOD neglected the buildings which have allowed them to fall into an advanced state of dereliction and dilapidation and would now need considerable resource to bring them to a usable condition.

The MOD now propose to demolish the buildings as it has budget funding to build a troop shelter on the site.

Fortunately the application to demolish the building has been rejected by Hart District Council. Whilst the future of the buildings is far from secure, the refusal does provide precious time for a more permanent safeguard to be found.

The risk of demolition of the buildings has caught the attention of Save Britain’s Heritage, and they have applied to seek to get the buildings listed protection with Historic England. The current dilapidated state of the buildings adds a considerable challenge to the possibilities of Listed status being granted, but the Society is in communication with several interested parties including Save Britain’s Heritage and the owners of Minley Manor in order to maximise the possibilities of a protection order being granted. Regrettably, previous applications in 2005 and 2016 to have the farm buildings listed were unsuccessful.

Since around 2015, Minley Manor has been in private ownership and the owner is keen to restore the buildings and grounds to its former glory. In April, I was privileged to be able to visit the estate to view the architecture and grounds of the main Manor and the surrounding buildings. It is a truly impressive estate packed with interesting features, character and history. Our thanks to Suzanne and Anthony of Minley Manor Events for allowing us to look around. Their website shows off the beauty of Minley Manor to its full extent. 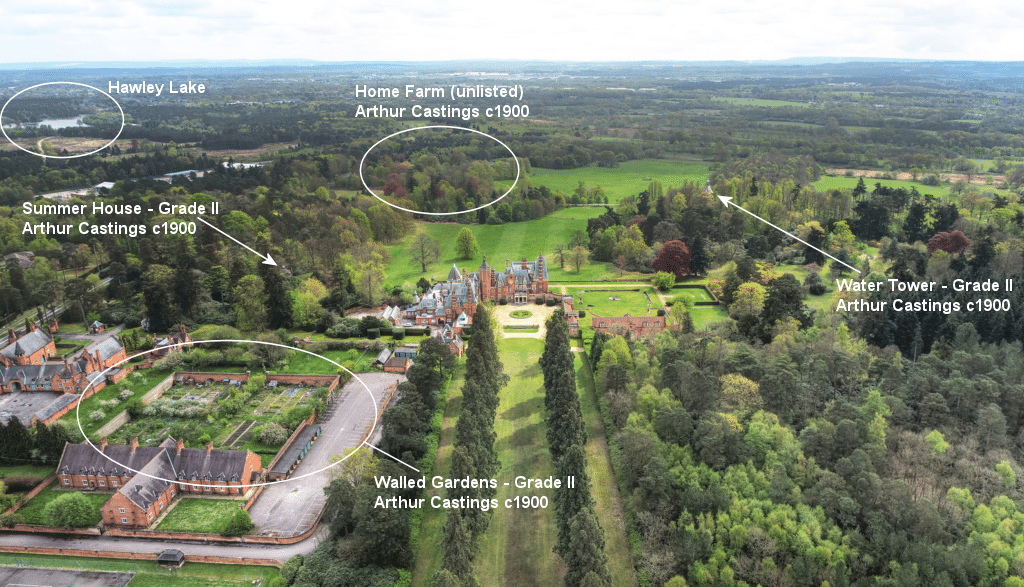